The red chamber also condoled with the family of the deceased, the Nigerian Air Force, Governor Yahaya Bello and the people of Kogi State.

Senate honours Late Tolulope Arotile: The Nigeria Senate on Thursday, honoured the first female combat helicopter pilot, Tolulope Arotile, with a minute silence on the floor of the upper chamber. 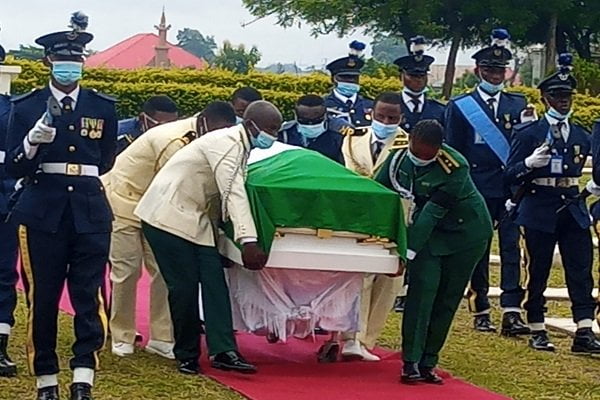 The red chamber also condoled with the family of the deceased, the Nigerian Air Force, Governor Yahaya Bello and the people of Kogi State.

This was done following the motion raised on the floor of the Senate about her death by the representative of the Kogi West Senatorial District, Senator Smart Adeyemi.

The lawmakers, however, did not approve the prayer by Adeyemi who sought his colleagues’ approval for a monument to be named after the late Arotile at her local community in Kogi State.

Senator Jibrin Issah, the lawmaker representing Kogi East Senatorial District, called for a full investigation into the death of Arotile.

Adeyemi while speaking said, “Flying Officer Arotile who hailed from Ife in Ijumu Local Government Area of Kogi State, was born on 13th December 1995 to the family of Mr and Mrs Akintunde Arotile in Kaduna. She attended Air Force Primary School, Kaduna from 2006-2011.”

“In September 2012, she gained admission into the Nigerian Defence Academy, Kaduna, where she was a member of 64 Regular Course.”

“Flying Officer Arotile who was commissioned into the Nigerian Air Force as a Pilot Officer on 16 September 2017, holds a Bachelor of Science in Mathematics from the Nigerian Defence Academy.”

“On 6 February 2020, she introduced the Air Force’s newly-acquired Augusta 109 Power Attack Helicopter to the President and Commander-in-Chief of the Armed Forces of Nigeria, President Muhammadu Buhari, during the induction ceremony at the Eagle Square, Abuja.”

“She served the nation as a Squadron Pilot at the 405 Helicopter Combat Training Group, Enugu, attached to the Air Component of Operation GAMA AIKI in Minna, Niger State.”

“She had recently completed her Promotion Examination and was awaiting her next deployment.”

“As a participant in the GAMA AIKI in Niger State, she flew her quota of anti-banditry combat missions to ensure a safer and more secured Nigeria.”

“Before her untimely death, she made significant and outstanding contributions to the war against terrorism, armed banditry and other forms of criminality in the country”

“Flying Officer Tolulope Arotile in her own words said, “I joined the military simply out of a passion for it. Being military personnel has been a long time ambition, the carriage and what it stands for are simply exceptional”

“Abubakar described her as “a very intelligent, disciplined, confident and courageous young officer who added value wherever she served”

“The late Flying Officer Tolulope Arotile was a shining young star in Nigeria’s Air Force combat flying missions and her sad demise has reduced the ranks the Air Force’s female pilots to six, thus she deserves to be memorialized in Nigeria’s history.”

I Only Smoke Weed, I Don’t Do Drugs – Naira Marley Declares