I Only Smoke Weed, I Don’t Do Drugs – Naira Marley Declares

I Only Smoke Weed, I Don’t Do Drugs – Naira Marley Declares: Controversial Nigerian singer, Azeez Fashola, popularly known as Naira Marley has suggested that there is a difference between smoking weed and doing drugs.

The singer who took to his Twitter account on Wednesday to make the declaration caused a little stir with his submission as many took to the Twitter platform to reply him.

Some comments, particularly those who identified themselves as Marlians, agreed with him while some others disagreed with the singer’s submission, noting that drugs and weed smoking are synonymous. 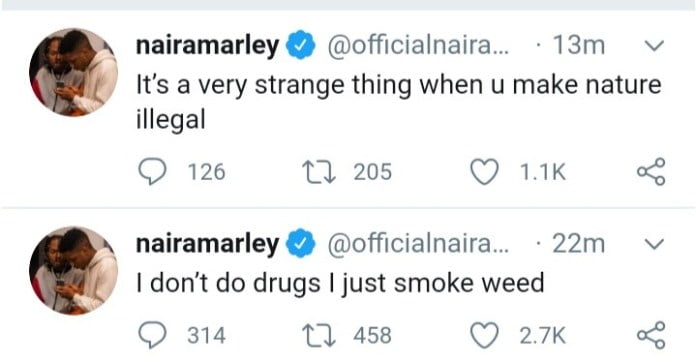 Meanwhile, it will be recalled that just a few weeks ago, Naira Marley held a concert at the Jabi Lake Mall during the COVID-19 lockdown, forcing authorities to shut down the facility for some days.

The concert held at a time a restriction order on large gatherings was still in place by the Federal Government in a bid to curb the spread of COVID-19.

The mall was however reopened for business, few days after it was shut down.

Breaking: House Of Reps To Drag Akpabio To Court Over NDDC Contract Claims